Ransom Riggs is tapping friends and family members to join him on his forthcoming “Library of Souls #StayPeculiar” tour, to promote the third volume of his Miss Peregrine’s Peculiar Children series. In the novel, due out September 22 from Quirk Books, time is running out for the Peculiar children; their beloved headmistress is still in danger, and Jacob Portman and Emma Bloom must stage a daring rescue mission. Each event on the tour, which will take Riggs to five cities, will have a unique format and will feature a different guest invited by Riggs.

“I wanted to do something that I hadn’t done on past tours,” the author said. “This one has fewer stops than my other tours, but I wanted this tour to be more special and memorable, and to make each bookstore visit an event with a capital ‘E’ – and something fun and peculiar.”

Here’s an early peek at the tour itinerary:

All of the tour events are ticketed and/or will have a wristband system in place. Tickets include a copy of Library of Souls and a #StayPeculiar tote bag filled with Miss Peregrine’s Peculiar Children swag. 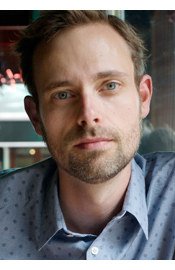 Ransom Riggs photographed by Tahereh Mafi
Throughout the tour, Riggs will offer a sneak preview of the making of the 20th Century Fox film, Miss Peregrine’s Home for Peculiar Children, directed by Tim Burton and written by Jane Goldman, scheduled for spring 2016 release. Riggs will show behind-the-scenes footage he shot on the film set. “I visited the set four times during the five-month shoot,” he said. “I joined them in a Florida suburb that looked a lot like the neighborhood I grew up in, on a London back lot, on the foggy moors in the west of England, and in Belgium.”

Because, said Riggs, “we feel for you readers in Idaho” and other locales off the tour route, Quirk is holding a sweepstakes for a chance to win a “VIP” trip for two to join Ransom in the tour city of their choice. Entrants can share a Peculiar picture of themselves (either in a Peculiar costume or Photoshopped) on Twitter, Tumblr, YouTube, Vine, or in a blog post. Photos should be tagged with #staypeculiar, and submitted via the publisher’s web site.

Nicole De Jackmo, Quirk’s director of publicity and marketing, reported that entries began pouring in immediately after the publisher announced the contest online. “Within a few days, we had 65 entries,” she said. “This is not an easy contest to enter, since readers have to ‘Peculiarize’ themselves and put quite a bit of effort into it. It’s been amazing to see what this generation of fans, who’ve been raised on technology, can do with cameras, Photoshop, and online editing tools. I am always impressed with the ideas readers come up with to make these books their own, and with the extent to which they’ve really immersed themselves in this world.”

Quirk has set a 500,000-copy first printing for Library of Souls, which features 50 never-before-published vintage portraits of children that Riggs discovered at antique shops and flea markets and in private collections. The series has clearly attracted a devoted following: rights to Miss Peregrine’s Home for Peculiar Children have been sold into 39 countries, and rights to Hollow City into 31, and the novels together have sold more than 1.7 million English-language copies worldwide. 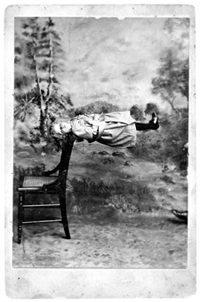 Though Library of Souls completes the story arc begun in the first book, Riggs hints that he may revisit the Peculiar children. “I left the door open for more stories, but I don’t think I’ll get any Molotov cocktails thrown at me for leaving everything hanging,” he said. “Let’s just say I can honestly say that I haven’t left this world behind. I’ve spent so much time there, and I’ve fallen in love with this world and the characters. They’ve grown so much.”

Given his preoccupation with the Peculiar realm for so many years, does Riggs dream about that world? “No, I do not,” he asserted. “I dream about programming the microwave. I think perhaps I get out my nightmares and my fantasies on my keyboard!”

3 weeks ago
by admin

3 weeks ago
by admin

Inspirational TV? Erickson: “ Get Smart.” I was a big Nick at Nite kid, and I’d often stay up late enough to watch “Get Smart” twice. It was so funny and deadpan and had the best opening credits sequence ever. I